Precious is a 4-year-old Domestic Longhair female neutered cat with a history of cystitis. The cystitis was thought to be stress induced, which is often the case in cats especially if they are quite nervous. This can be brought on by any sudden changes, such as a new cat to the area, renovation work or even a guest staying for a couple of days. The symptoms of frequent urination and blood in the urine would often resolve following antibiotics and an anti-inflammatory. 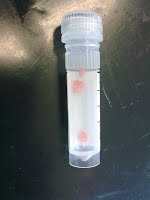 After repeated cases of cystitis, looking at a urine sample under the microscope revealed crystals in the urine. These crystals can sometimes go on to develop stones within the bladder so Precious was placed on a special prescription diet to try reduce the number of crystals. As the symptoms continued we decided to investigate further. An ultrasound of the bladder revealed that stones had developed in the bladder, which was confirmed on an x-ray.  As a result surgery was performed to remove the stones from the bladder. Three stones were removed from the actual bladder and a further two were flushed out of the urethra. Since the procedure Precious has been doing very well. It would still be advisable for Precious to stay on the prescription urinary diet to help reduced further stones from forming.

Please note: All visits are strictly by prior appointment